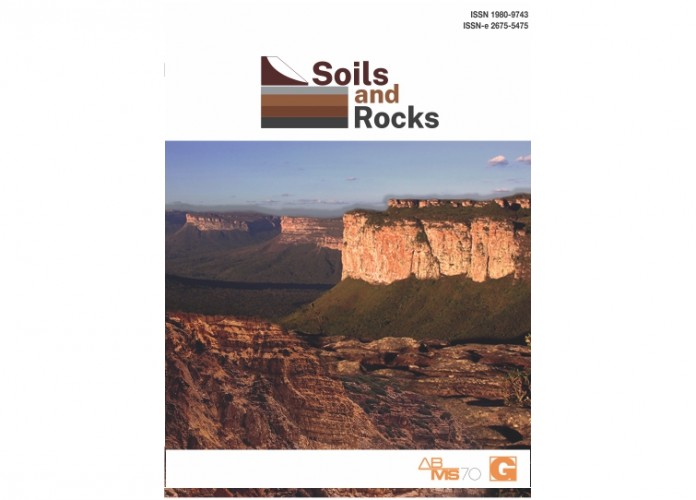 A Journal is born...

In 1975, a large delegation of professors and students from COPPE attended the V Pan American Congress of Soil Mechanics and Foundation Engineering, in Buenos Aires, Argentina. Jacques de Medina, Dirceu de Alencar Velloso, Willy Lacerda, and Francisco de Rezende Lopes were part of this "entourage". It became evident during the conference that the amount of Brazilian papers outnumbered those presented by any other Association. At the ConferenceÂ´s banquet, during a conversation, Prof. Norbert Morgenstern, who was one of the invited speakers at that conference, directed himself to the four of us and made an interesting remark that was going to persist in our minds for the next year: "Brazil has produced many research papers. It is time for you to have your own journal". We contemplated that idea until one day, in 1976, during a meeting at Dirceu VellosoÂ´s office, when we decided to create the magazine. The name Solos e Rochas was an unanimity. Then came the practical questions. Who the editor would be? How to financially support the journal? How would we select the articles for the first issues? And so on. It was decided that Dirceu Velloso would be the first Editor of Solos e Rochas, Francisco Lopes would be responsible for the production of issues, and Medina and I would be associates, starting as the first reviewers. COPPEÂ´s Director at the time was Professor Paulo Alcantara Gomes. When approached, he immediately agreed to fund the journal. And so it was. The first articles were written by invited authors. The article by Prof. Marcio M. Soares was ready for publication by the end of 1976. The paper had to wait, until the journal found the required funding for the first issue. Soon, the first paper was followed by the manuscripts written by Paulo Cruz and Willy Lacerda, delivered for production by the end of 1977. With COPPEÃ‚Â´s support and the delivery of these two additional articles, the first issue was published in January, 1978. That would be the only issue of that year. A second issue followed, in 1979. By the end of 1979, COPPE could no longer afford to support the journal. To find a new source of funding, we reached out for help from Prof. Carlos de Souza Pinto, president of ABMS, proposing that the association should take over the direction of Solos e Rochas. He immediately accepted the idea, with a new chapter of the journal starting in 1980, now publishing three issues per year. From this point, we switched from publishing invited paper to a regular peer-review process, supported by numerous specialists. In 2007, during my term as President of ABMS, the journal became an international publication, with a brand-new name: Soils and Rocks. It has been a great satisfaction for me to follow the development of the journal to this day, and its commitment to excellence in the field of Soil Mechanics and Geotechnical Engineering, thanks recently to the efforts of its latest editors, starting with Waldemar Hachich.